Golden Harmony Martial Arts and Wellness has been created by Sifu Rupert Harvey using his decades of experience in the martial arts and the holistic healing practices. Beginning his martial arts training in the 1960’s informally with his brother, Carl Harvey, Sifu Rupert Harvey went on to train in the 1970’s under Master Kyong Lee and Master Hyun Lee in the Korean martial art Wanin-Do. He received his black belt in that system from them in the 1980’s.

In the early 1990’s while on set of the television series Kung Fu: The Legend Continues, Sifu Rupert Harvey began training with his most prominent influences, Sifu Michael Vendrell and Sifu Rob Moses. After earning the rank of Sifu from these Masters, he also received from them permission to teach. Sifu Harvey’s lifetime commitment to their teachings remains in place to this day, directly under the tutelage of Sifu Rob Moses and in spirit under Sifu Vendrell who passed away in 2013.

As a Juno Award-winning musician and an accomplished martial artist, Sifu Rupert Harvey has worked on many Toronto film and television productions. He has also travelled extensively, meeting and training with other notable teachers over the years. Some of these teachers include Qigong Instructor Shambu Charles Mardel from Hawaii and Guro Nonoy Gallano, both of whom have had a profound influence on Sifu Harvey. In addition, Sifu Harvey’s knowledge and teaching has benefitted from the invaluable contributions of Qigong Instructors Sifu Daisy Lee, Sifu Francesco Garripoli and their teacher Dr. Duan Zhi Liang as well as the Toronto Chinese Community and the Chow Family. Many other friends and associates have also contributed to the development and success of the Golden Harmony Martial Arts and Wellness System.

As a principle-based martial artist, Sifu Harvey has seamlessly combined and integrated these influences into a complete system. Traditional and progressive in both training and practice, the Golden Harmony Martial Arts and Wellness System is highly structured yet adaptive, living within each practitioner and holistically developing every aspect of the individual and their training.

The core foundation of Golden Harmony Martial Arts and Wellness is based on the teachings of Sifu Rob Moses’ Tai Mantis Kung Fu and Golden Spiral Wellness and Sifu Michael Vendrell’s transmission of Yee Chuan Tao, Shaolin Chin-Na and Kali.

Golden Spiral Wellness was founded by Sifu Rob Moses (the top student of Dr. Kam Yuen) as a method for developing human ‘flow’ and naturalized movement so as to create dynamic flexibility and generate power while focusing the mind on specific geometric patterns and natural physics. This system consists of Nine Palms Movements and also incorporates movement with the Physiostix, a line of practice tools based on the Fibonacci Spiral. 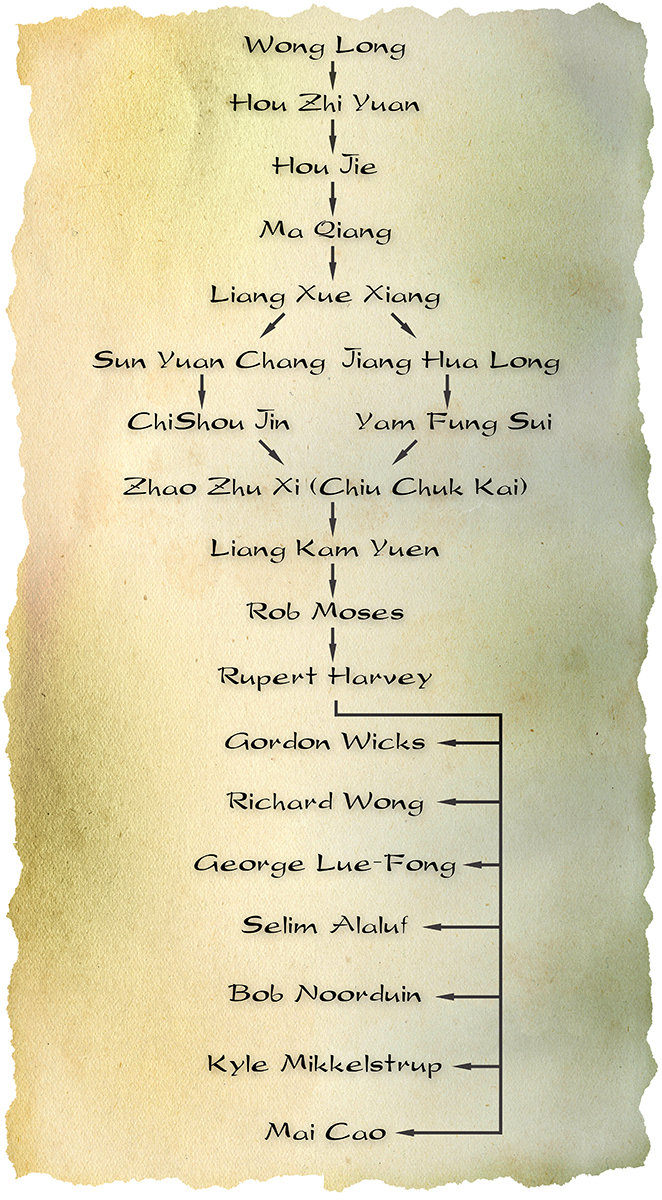